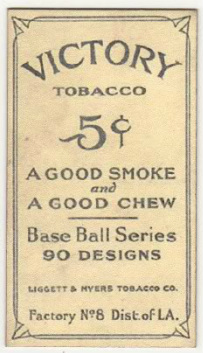 T214 back
The T214 Victory set is another one that gets confused with the much more famous T206 set due to a similar design and even the same photos. However, they are considerably harder to find and therefore several times more valuable. In fact, they're so tough some collectors aren't convinced that all the cards have been found yet.

Like other card sets that appeared in the early 1900's, the set features a lithograph of a player with a white border. Below the photo are a last name and a team city and league, if necessary. Unlike T206 cards, the ink used for the text is blue. On the back is an advertisement for Victory tobacco, with a notation that there are 90 total cards in the set. That number has not yet been confirmed, as there are currently 66 known cards in the set. In 1990, the number of known cards was 30. There is still the possibility that more cards can be discovered.

Like other "white border" sets, T214's were probably printed by American Lithographic Company in New York. 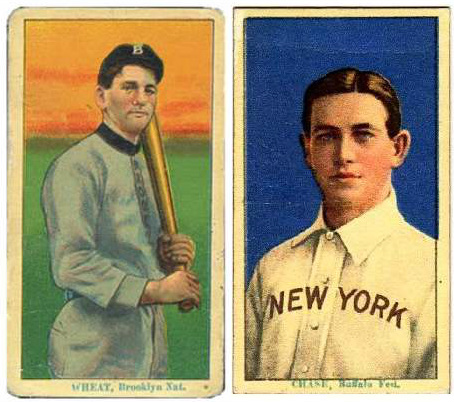 While the back of the T214 clearly states "90 Designs" as of today only the following 66 cards have been confirmed.
* April 2016 - Previously uncataloged Bender (no trees), Miller, Oldring, and Warhop showed up in REA auction