The black-and-white-printed cards measure approximately 2-1/16 x 3-3/8 inches. Each displays a full-body action pose of the player. The player's name, position and team are printed at the bottom of the vertically oriented cards.


These cards were distributed in Holsum Bread made by H. Weil Baking Company.

You can distinguish between Type 1 & Type 2 cards by checking the "H. Weil Baking Company" line of text. On Type 1 cards this line stretches the full length of "Holsum Bread". On Type 2 backs it is more compressed.

In December of 2013 there was a discovery of Holsum Bread cards that included Babe Ruth and two different poses of Ty Cobb. In addition, the 1919 Black Sox center fielder, Hap Felsch, was part of the discovery. All four cards, shown above, were previously unknown to the hobby. The find also included extremely scarce but known Holsum Bread cards of Joe Jackson, Lefty Williams and Eddie Cicotte.


All seven of these cards were auctioned by Goodwin & Co. in their February 2014 auction.


June 2014 - I received a message from Rick McQuillan. He has a Ray Schalk type 1 in his collection. This card was not previously listed, in either type 1 or 2, in any other checklists that I had seen. Added as a new discovery to the checklist. 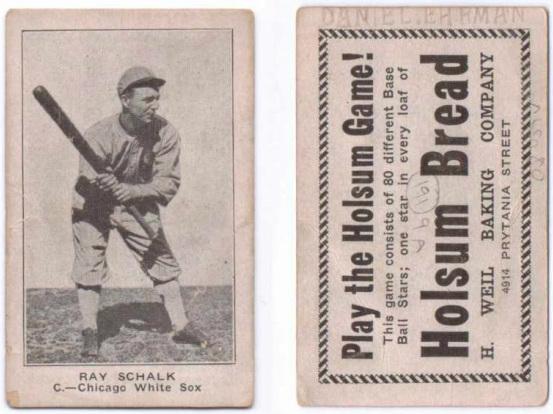